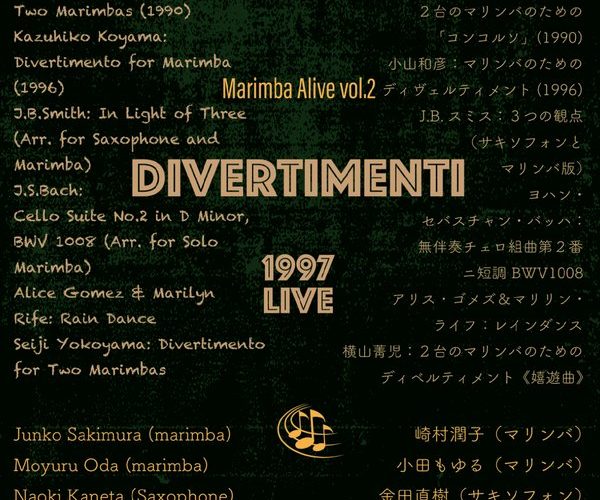 New album DIVERTIMENTI – Marimba Alive! vol.2″ has been released. This is a live recording of the concert on July 5, 1997. It features two divertimentos by Kazuhiko Koyama and Seiji Yokoyama. You can buy digital versions from Apple Music, Google Play Music, Amazon and more.1

The program consists of music written originally for marimba in the late 20th century, except Bach.

Ingolf Henning (1931 – 2017) is a German composer. Concorso is a duo written for two marimbas. The outer sections of Henning’s sensitively written duo are propelled by shifting accents in passages of continuous 8th notes; the middle section proves that a captivating melody can still be found in a contemporary marimba work. (Marimba 1: Moyuru Oda, Marimba 2: Junko Sakimura)

Kazuhiko Koyama (1964 – ) is a Japanese composer whose work includes Symphonies and Piano Concerti. Divertimento is the original work written for Marimba. While composing the piece, Koyama consulted Junko Sakimura for various Marimba techniques and resulted in uniquely Marimba piece. The entire piece consists of five movements, out of which, movements 1,2,3, and 5 was performed in this recital.
(Marimba: Junko Sakimura)

J.B.Smith is an American composer who wrote numerous pieces for Marimba. “In Light of Three” is a two movements work with lyrical first movement and odd-meter, funk-derived second movement. It was originally written for a clarinet, a marimba, and tape. In this performance, clarinet was replaced by Alto Saxophone, and the marimba part was played on the right hand while the tape part was played on the left hand. (Saxophone: Naoki Kaneta, Marimba: Junko Sakimura)

J.S.Bach (1685 – 1750) wrote Unaccompanied Cello Suite most probably during the period 1717–23 when he served as Kapellmeister in Köthen. As the sound range of Marimba matches quite well with that of Cello, this piece is also often played on a Marimba. You can also hear that marimba brings out a different charm from playing with a cello. (Marimba: Oda Also Yuru)

Alice Gomez (1960 – ) is an American composer. This four mallets piece became popular among the Marimba players with its catchy melodic statements.

Yokoyama, “The Dibertiment for Two Marimba” (1974)

Yokoyama (1935 – 2017) is a Japanese composer known for his soundtracks for space pirate Captain Harlock and Saint Seiya.

Divertimento for two Marimbas (1974) is an original work for two Marimbas commissioned by Tomoko Kusakari and Mutsuko Fujii. It consists of three movements. A lively first movement is followed by a deep, passionate 2nd movement, then ends with a blazingly fast 3rd movement.